The result of years of R&D, these short path kits were created specifically for customers looking to take the next step in their operations. The 20L boiling flask holds up to 12L (10-12kg) of product per batch.
This increase in surface area and volume (in addition to the new PDH-3V silvered distillation head with 40mm bore size) gives the 20L the power to output 1-2L per hour during the main body fraction.

Up to 10-12 kg. of product per batch.
The 20L boiling flask holds up to 12L (10-12kg) of product per batch; This increase in surface area and volume (in addition to the new PDH-3V silvered distillation head with 40mm bore size) gives the 20L the power to output 1-2L per hour during the main body fraction.
Dual-headed distillation, double the output.
With two (2) distillation heads running simultaneously, the 20L has the ability to do 2-4L per hour output (and even more) depending on runtime parameters.
Surprisingly small footprint.
We’ve managed to achieve significant upgrades in both output and efficiency while decreasing the total size of this kit. The result is the most powerful kit per square foot we’ve ever produced.
Prior dual-headed systems (5L and 12L legacy kits) took up excessive bench space and required significant lengths of tubing/hose to connect both sides. As a result, a variety of issues presented themselves.
Greater efficiency, simplified design.
Here are some common issues with other large-format distillation kits:
Build up of residue in tubing (causing flow issues and drops in efficiency)
One head running faster than the other (due to variable lengths in tubing)
And unequal heating of the heads (due to the top mantle having a seam at one of the distillation heads)
Our 20L system offers solutions to many common issues:
Full-bore Only Design−no tubing/hoses for vacuum connections anywhere on the system
Utilizes air condenser to create an area of pressure drop prior to exiting to the Y-Manifold
Maximizes molecular flow conductivity from condensers through the cold trap
KF25 Flexible Y-Manifold:
Eliminates variability in distance to vacuum pump
Shrinks benchtop space down to the size of a 12L system
Single KF25 connection to cold trap/vacuum pump
High conductance of molecular flow from both sides of the system into the cold trap
Ability to achieve high-vacuum levels within the system due to conductance
Dual Heads Running in Parallel, Rather Than Opposing:
Simple tee connections for condensers, short lengths of hose
Lattice rack runs through the center of system, creating a mirror setup
Seam on Top Mantle Located on the Back, Away from Distillation Heads
No variance in top mantle heating area surrounding each distillation head
Additional key features:
As long as the system is level from front to back (a view from the side is necessary), heads will run within a few degrees of each other−so no more playing with one head going faster than the other.
Dual-point vacuum sensing−one on the system, one at the pump
You can now see the variance between system pressure and pump pressure, to determine cold trap efficiency and pump integrity.
Simple vacuum release on one of the distillation heads
Swing arm usability via utilizing extra clamps−to mount 5L recovery flasks upwards during the start of distillation for primary fractions
The condenser GL caps and boiling flask Rodaviss caps are now rated for high temperatures up to 250℃.
Compatibility with Modular Condenser Kits (MCK) for secondary separations, etc. 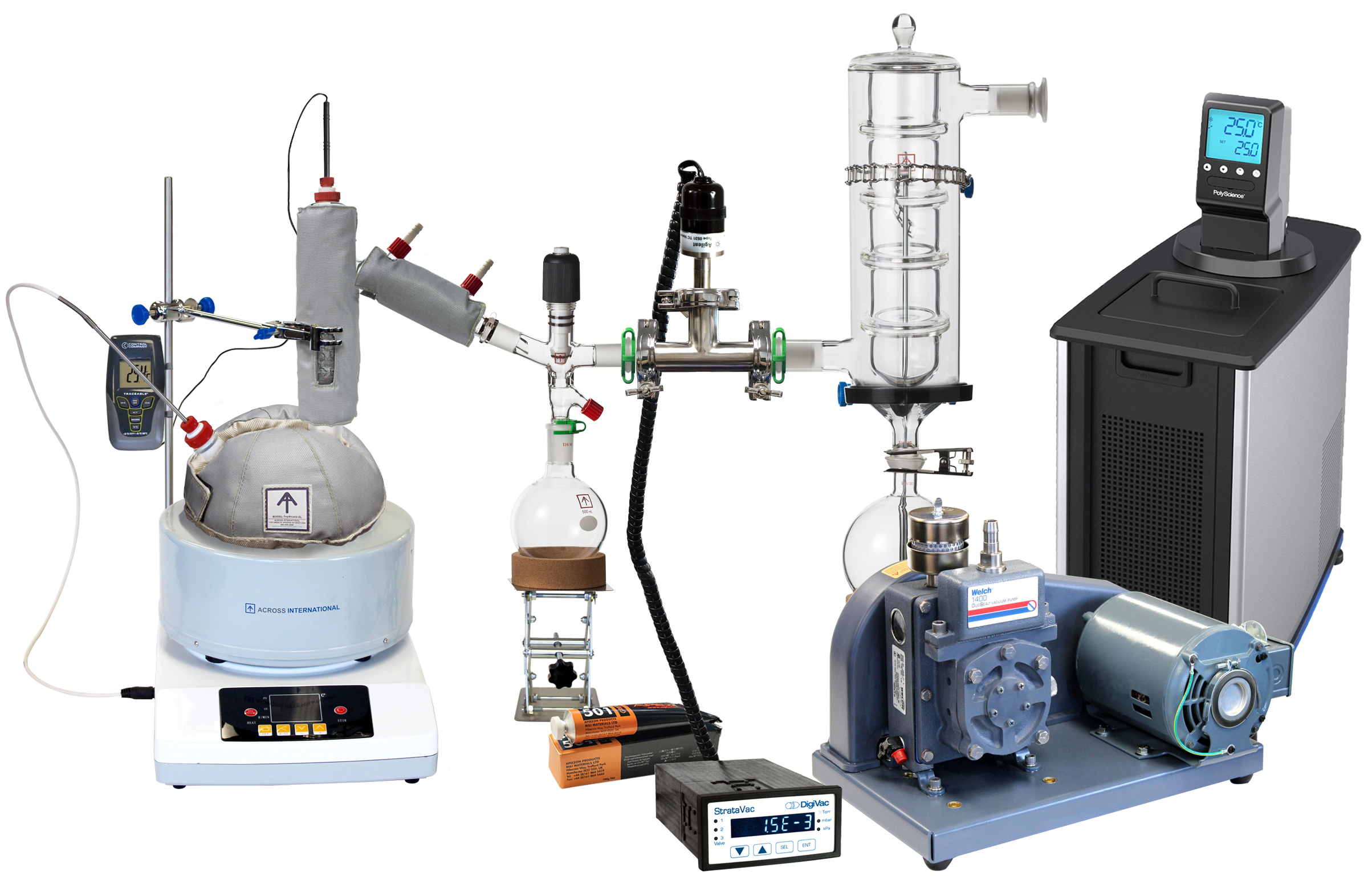 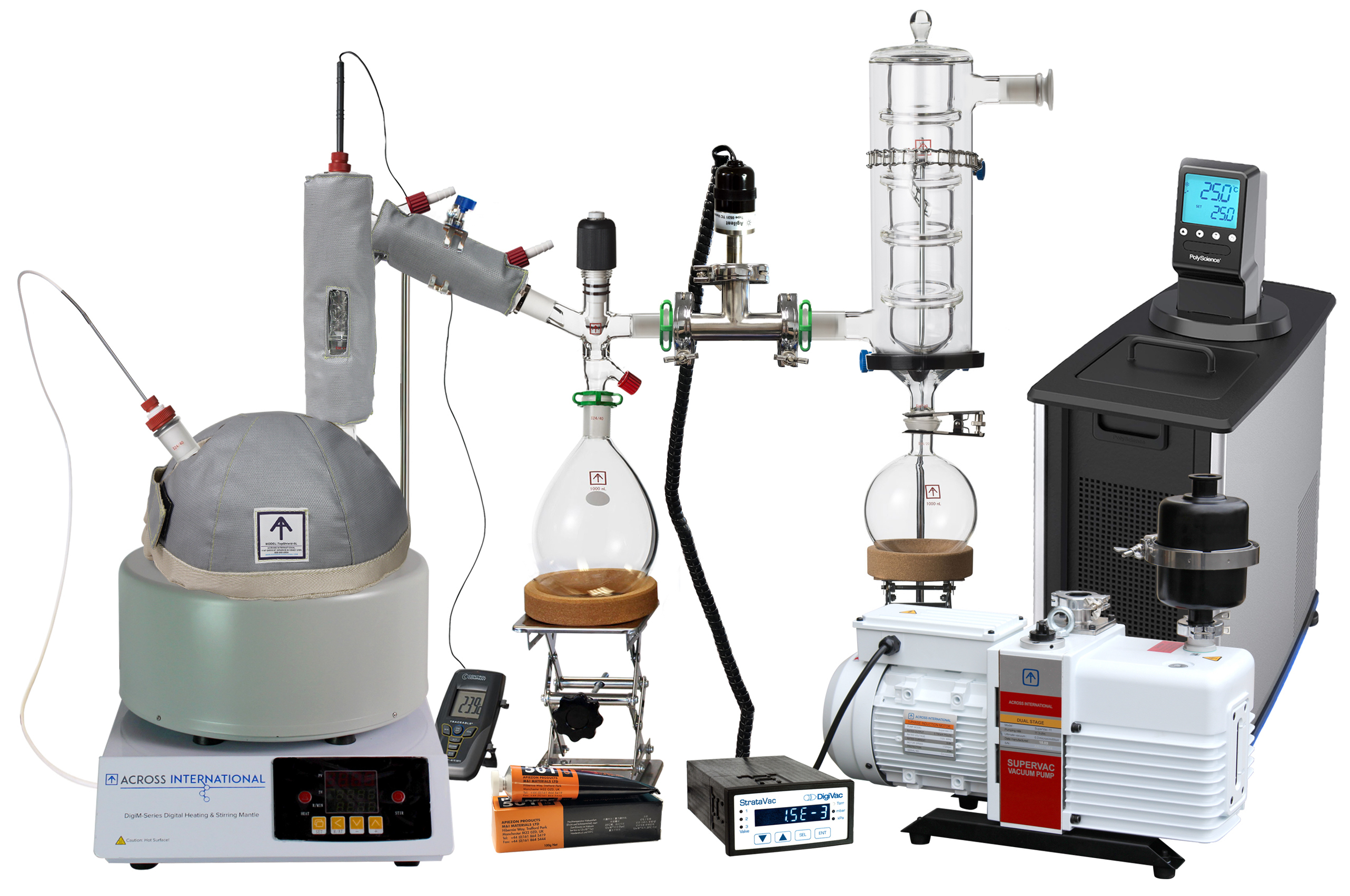